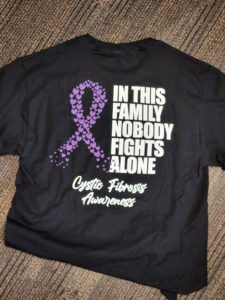 On May 14, 2022, a team of Upstate Orthopedics co-workers, family, and friends gathered at Onondaga Lake Park to make Great Strides for the Cystic Fibrosis Foundation. Krissy Galli, a supervisor for our Patient Care team at Upstate Orthopedics, is all too familiar with this progressive, genetic disease. Her son, John, was diagnosed at an early age and on February 25, 2022, he underwent a bilateral lung and liver transplant at Columbia Hospital in New York City.

Cystic Fibrosis causes persistent lung infections and limits the ability to breathe over time and currently has no cure. The mission of the Cystic Fibrosis Foundation is to find a cure while raising awareness about this rare, genetic, and life-shortening disease. Great Strides is the CF Foundation’s national fundraising event, organizing nearly 300 walks across the country annually.

We were blessed to have John join us at Upstate Orthopedics where we presented him with our donation to the Cystic Fibrosis Foundation that was raised through t-shirt sales and other contributions. It was a joy to have John on-site and it was especially inspiring to hear his words of wisdom. John says the support of others has meant “everything, because you don’t really know the value of friendship and support until it is needed, until you are down and out. It really makes all the difference between where you’ll be in a year, where you’ll be in two years, where you’ll be in five years and overall during the trajectory of your life – when you’re desperate if somebody’s there or not.” When asked what he is looking forward to, John said, “Seeing my brother’s kids grow up, being a good uncle, a good brother, and a part of the community now that I am able-bodied to help others.”

Between John’s time on the transplant waiting list, the surgery, and follow up appointments, John’s mother, Krissy, has made numerous and frequent trips from Syracuse to New York City. She says the support of those around her have “made a terrible, difficult situation easy” and she is grateful “for the success of the surgery, [and] for the support of family and friends.”

John was sure to share his gratitude for many, including, “Thank you to everybody at Upstate Orthopedics, my mother especially, my family, my friends for visiting me in the hospital, the doctors who performed the surgery, and the donor who gave me the organs.”

What’s next for John? He is planning on working on video projects with friends, and looking to do stand-up at the Funny Bone. Comedy has been important through his journey, as he says, “You have to laugh through the pain… add levity to the situation.” When he gets to the Funny Bone, he will for sure have a whole group from Upstate Orthopedics clamoring for tickets.

In parting, John shared his most important message, “Show up for your friends and the people you love, even if you don’t have anything to give them when you get there. That can make a big difference to somebody.”

“Thank you to everybody at Upstate Orthopedics, my mother especially, my family, my friends for visiting me in the hospital, the doctors who performed the surgery, and the donor who gave me the organs.” – John Galli