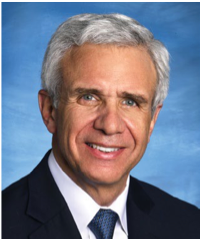 Stephen Albanese, MD is Professor of Orthopedic Surgery at SUNY Upstate Medical University in Syracuse, New York. He has been department chair and residency program director at Upstate since 2000. Dr. Albanese received his undergraduate degree in electrical engineering from Bucknell University and MD from SUNY Buffalo College of Medicine. He completed orthopedic surgery residency at SUNY Upstate Medical University and pediatric orthopedic surgery fellowship at the Hospital for Sick Children in Toronto, Ontario.

Dr. Albanese’s academic interests have focused on education, accreditation, and certification. He has chaired the AAOS Committee on Evaluation (1996-2001), been a mentor in the AAOS leadership fellows program and completed two terms as a member of the AAOS Council on Education (1996-2001, 2005-09). Dr. Albanese has been a member at large on the AAOS Board of Directors (2002-2004). He served seven years (2005-2012) on the Accreditation Council for Graduate Medical Education (ACGME) Orthopaedic Surgery Residency Review Committee (RRC) and was chair for the final 3 years. He served a 6-year term (2012-2018) on the ACGME Board of Directors and chaired the Program Requirements Committee (2016-2018). He served as a member of the American Orthopaedic Association Academic Leadership Committee (2006-2012). During his ten year term (2007-2017) on the American Board of Orthopaedic Surgery Board of Directors, he chaired the Oral Examination Committee (2010-2012), was active in the question writing task force and served as President (2013-2014).

Dr. Albanese’s clinical interests are pediatric orthopaedics and spine deformity. He chaired the Scoliosis Research Society Morbidity and Mortality Committee (1998-2000). He served as a member at large on the POSNA Board of Directors (2004-06) and chaired the Education (2000-2002) and Health Care Delivery Councils (2014-2017). In addition, he has served on the Terminology and Nomenclature, Data Management, Education, and Practice Management Committees for POSNA.

tell us what you think!

Our award-winning library has more than 200 conditions and treatments!